How to Draw Superman VS Batman Logo – Easy Step by Step

January 5, 2017 By SatyamMJ 0
Today I’m going to teach you How to Draw Superman Logo VS Batman Logo. It is an easy, simple, and step by step drawing tutorial guide with an effective method for kids and also for intermediate artist.
Just you have to follow few simple steps and you can draw a good superman logo.

How to Draw Superman Logo VS Batman Logo

How to Make Superman Logo

Don’t be so panic! Before making Superman logo vs Batman Logo. We will draw it in two parts.

Superman Logo “Superman S” is one of the most famous logos in the world. Superman logo is the iconic logo for the fictional DC Comics Superhero Superman.

In its original establishment in action comics #1, Superman’s Emblem was a letter S with red and blue on yellow police badge symbol that resembled a shield.
There are many superman logo makers online that make real superman logo and own personalized superman logo.

The tradition of wearing a representative symbol on the chest was mimicked by many subsequent superheroes including Batman, Spiderman, The Fantastic Four, Green Lantern, The Flash, Wonder Woman, and much more.

John Romita Jr. is the creator of many superheroes which includes Superman, Batman, etc.

So guys here I am providing the basic and complete A-Z guide on How to Draw Superman and Batman
Visit the above page and there you can easily learn the superman and the Batman drawing.

NOW
➤ Here I’m going to show you How to Draw Superman Logo step by step easy.

What Will You Need?

How to Make a Superman logo 3D

This is part 1, here we will draw the first part that is how to make superman logo 3D.

Take a white drawing sheet and make an equilateral(all three sides of the triangle is of the same size) triangle shape with the pencil.

I recommend you to use light strokes. So, that it can easily erase without any scar on the sheet.

Step 2
Draw a straight line starts from the middle of the lower angle and cuts the half of the upper base to draw the Superman logo, as you can see in the figure below, and draw a line parallel to the base.

Step 3
Connet both the parallel line with each other. The figure below appears like Diamond shape.

This will the basic structure of Superman Logo S.

Step 5
Using the eraser, erase lightly to lightened the lines of the Diamond. Using light Strokes of an eraser.


Steps 6
Now time to draw Superman logo outline.
Draw the arc as you can see in the figure below.

Step 7
Draw Superman S in the Diamond as instructed below.

Step 8
Outlining the whole Superman Emblem using pen and erase all the previous pencil work
to give it more contrast look.

More pic further you can also give it more shaded and 3D look.

Now moving ahead !!!
I am going to combine this Superman logo with the Batman logo (Superman VS Batman)
Draw Batman Emblem. First, check this out Drawing of Batman Step By Step a complete step by step guide on Batman sketch. This is a tutorial for kids, beginners, and also for intermediate(advance).
Let’s start our further and draw Batman Vs Superman logo tutorial

How to Draw Superman Vs Batman Logo

This is Part 2, Here in second part we will going to draw batman logo
on the superman logo – that will appear like Superman Vs Batman logo.

Using pencil lightly to draw the batman’s wings and the head of a batman emblem. 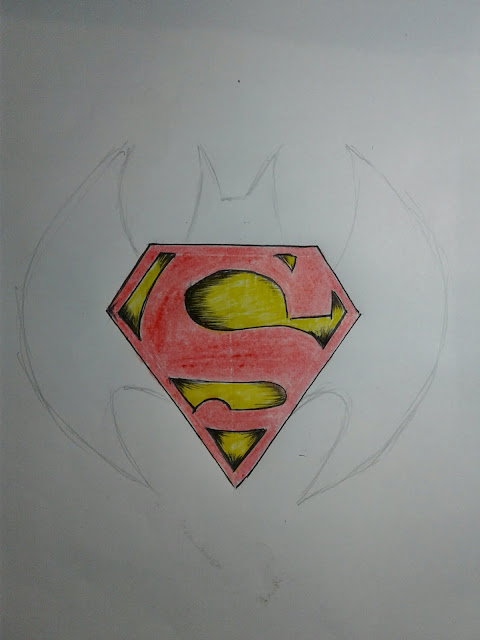 Now you can also use shading strokes or you can draw
it fully black, as the color of the batman logo(emblem)
is black.

Shade the remaining parts of the Batman logo and

here’s the Superman Vs Batman Logo is finished! 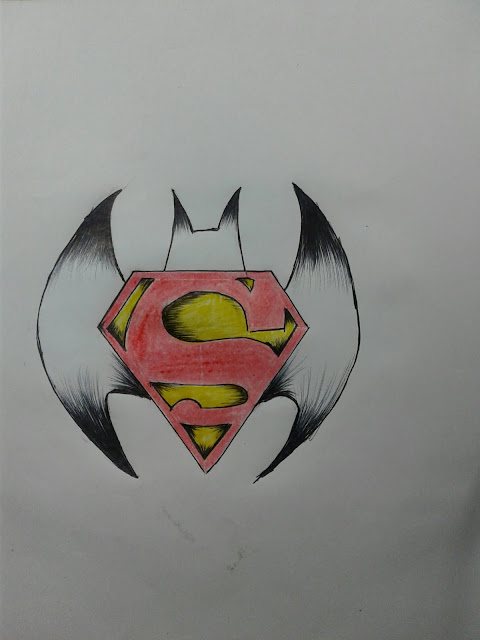 Further, You can also make cracks for a more
real and contrast look. 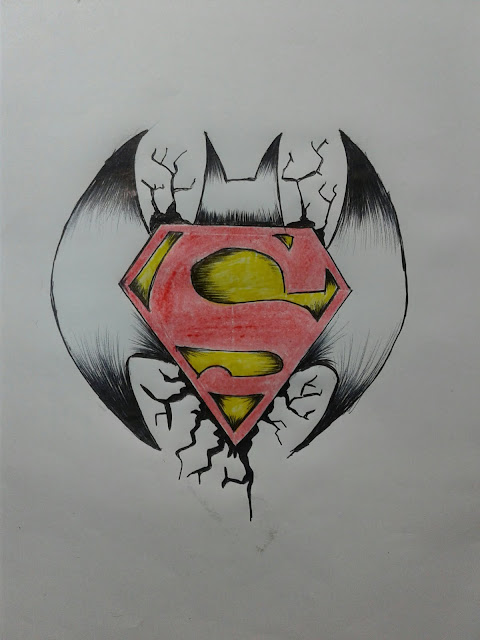 Side View of the Superman Vs Batman Logo 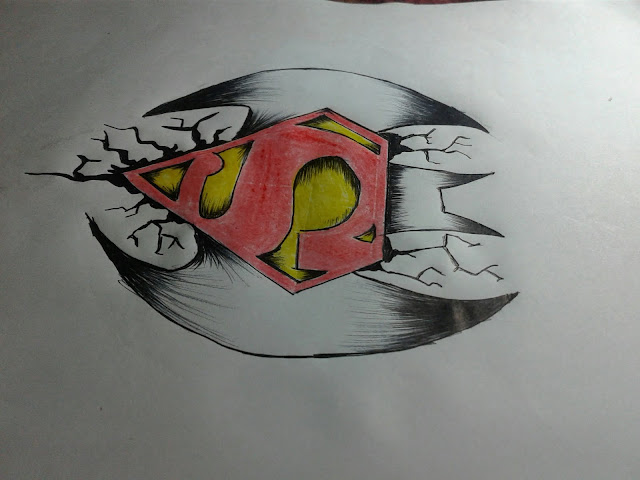 This tutorial is on How to Draw Superman Logo VS Batman Logo. I hope the tutorial was interesting and cognitive for you. If you want to try to draw something more complicated, I recommend you tutorial on How to Draw Deadpool and How to Draw Anime Couple. Stay tuned and wait for new lessons!
If you have any problem you can contact me or comment below in the comment box.
CategoryBatman Logo Superman Logo